A breaking-out team of 3 had just completed a line change. The head breaker-out (HBO) positioned himself 17-meters behind the block as he observed the tail rope passing through before re-starting extraction.

A piece of log was disturbed by the returning rope and slid down the rope gaining momentum. The piece of wood eventually end-for-ended toward the HBO and struck him fracturing his arm, dislocating his elbow and puncturing his lung. 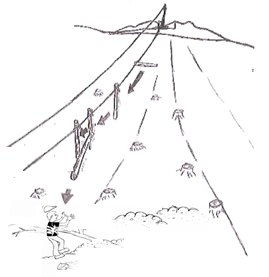 Immediate and Root Cause Factors - The HBO was undertaking a standard practice - observing the safe functioning of the working block prior to re-starting.

Technically speaking, the HBO was standing in a safe position to do this observation. However, the contact (and subsequent injury) points to the need for a safer observation position and guidelines to direct the thinking of the breaker-outs in such circumstances. This work will be completed as a project.

View this article in Safety Bulletin 115