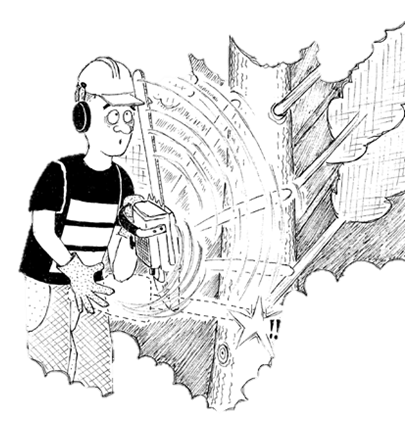 We have had two serious kickback events in recent months, one resulting in serious cuts!

Chainsaw kickback injuries were at one time among the highest of the injury categories and many bushman show scars on forearms, shoulders and even their faces. Those sorts of injuries have dropped away most likely due to good training and improvements in chainsaw design, notably safety devices.

It is therefore unusual to see a couple of serious events, one after the other, involving highly trained people.

FIPS 8157 23/08/2016: Attempting to clean up the cuts in a scarf, a tree feller lost balance and slipped over. As he fell to the ground, his chainsaw swung back and the spinning chain struck his left forearm causing a severe laceration.

FIPS 8275 16/09/2016: Trimming the lower branches around an unpruned tree, a tree feller up- cut a branch causing the saw to kickback. The tip of the bar made contact with the trunk, which drove the saw from the operator's right hand and activated the chain brake. The chainsaw, with some force, hit the operator in the right forearm.

There can be no doubt a chainsaw is not a tool to be underestimated! Of note, in these two cases, is the skill and experience levels of the fellers involved. Both held the National Certificate in Advanced Production Tree Felling, L4. One feller had 217 credits of learning and the other had a massive 429 credits and no less than 6 National Certificates!

View this article in Safety Bulletin 103